Transport from Airport. Participants must communicate to school_fpricci@its.me.cnr.it their arrival and departure times and flight numbers of their arrival in the Travel Form by March 5th.

Transportation from Palermo or Trapani airports to Erice will be provided by the EMFCSC on the official arrival day. A limousine or a bus of the Ettore Majorana Centre (EMCSC) will be available, provided you have properly filled and returned the Travel Form no later than March 5th. On your arrival at the airport you shall look for the driver of the EMCSC who is waiting for you and shall carry you to Erice. He will be there showing around the poster of the School. 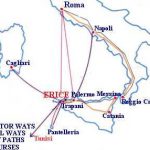 Participants to the School must arrive in Erice on 1st April, not later than 12:30 p.m.